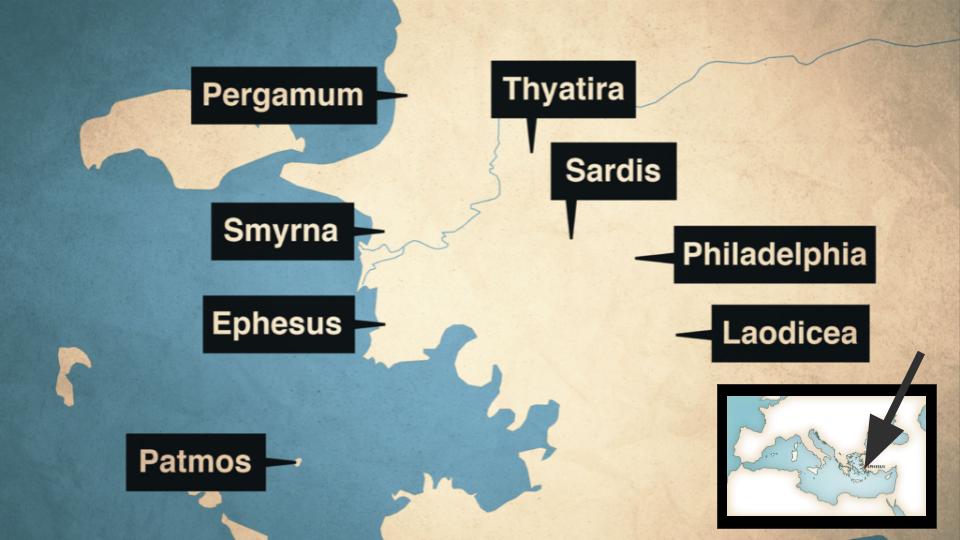 “I know that there is pain, but you hold on for one more day and break free the chains…”

A 1990s classic song brings those words of wisdom into my mind as I read about Thyatira, the next church we look at in our series. Have you ever felt out on a limb being a follower of Jesus? You wouldn’t be alone; in fact, you would be like a small group of people in Thyatira. A remnant of Jesus’ followers are holding on to his truth in this city, and Jesus says hold on in there. How do we hold on in Bedhampton, and what are we holding on to? Can we work the answer out this Sunday?

Oh and extra brownie points for those who can name the song!

These notes are my speaking notes and are provided as an accompaniment to the recording. Please accept that they are not intended to be a published grammatically correct essay. I do hope and pray however they help you move towards Jesus.

Here we are once again in our series of looking at what Church is. We are going through the book of Revelation and the seven churches that Jesus spoke and seeing how that relates to us today.

And today we reach Thyatira (Thigh-a-tear-a).

Thyatira is once again in what we call modern Turkey. In all honesty today it is a bit of a dump, but not so in ancient times. It was a thriving commercial town, although it was the least important of our seven churches in Revelation.
Thyatira was well-known for a couple of things. It was famous for its dyeing industry and was a centre of the indigo trade, purple cloth was very expensive in those times. (In Acts 16 Paul met a woman called Lydia, a dealer in purple cloth who came from Thyatira). It was famous for its coppersmiths and also for its many trade-guilds (which were a cross between our modern trade unions and The Masons). Unlike some of the other cities around, the church in Thyatira hadn’t suffered a lot of persecution from either the Roman authorities or the Jews.

So why in our letter does Jesus seem to be so harsh with them?

Here is the problem. Thyatira was a city of craftsmen and merchants. The major problem for the church was posed by the many trade guilds in the city. Guilds had a patron god; the local god of Thyatira, a representation of Apollo, probably served that purpose. The feasts of the guilds were held in a temple and were viewed as religious occasions; the meat was offered to one of the gods. The participators shared it with him, and the occasions frequently ended in debauchery.

How could Christians participate in such meetings?

Then against that background, Jesus says this…

I have this against you: you tolerate that woman Jezebel, who calls herself a prophet. By her teaching, she misleads my servants into sexual immorality and the eating of food sacrificed to idols.

So that is the problem. It’s just like your Mum & Dad always said. Birds of a feather flock together. Or you become like those you hang about with, and that is not always good, depending who you hang around with.

Was it only me who had a Mum & Dad who worried about who I hung around with? I distinctly remember Dad saying if you hang around with those boys there will be consequences you will get yourself into trouble.

One day I and “those boys” were walking from Purbrook to Leigh Park and it was at the time when they were building the bridge over the motorway by where B&Q is now. I remember we came across a tunnel under the new road. It was a dark tunnel, a scary tunnel even for me a tough nut 10-year-old. One of my mates dared me to run through the tunnel and out the other side. Well, that meant I had no choice. I didn’t want to do it. I wouldn’t have normally done it. But I wasn’t backing down from a dare. So I started running. And I ran for all I was worth through the damp dark tunnel. I ran as though I was being chased by the devil himself because I was so scared. Then suddenly. BANG! I fell over and there was the most almighty pain in my thigh. In the dark, I had run at full speed into a pipe that crossed the tunnel at my thigh level. I fractured my leg.

There were, as my Dad had said, consequences of hanging around with those who would tempt me into actions that were not good for me. Interestingly the consequence was much greater than a fractured leg. The time I spent out of school because of that leg, led to me being bullied, and then to taking more time away from school because of the bullying and spiralling down from them into a very unhealthy situation.

That is the warning that Jesus is giving. He is saying to that church, I know the guilds you hang around in I know how they influence and tempt you into worshipping idols. There will be consequences.

We might think that’s OK we don’t worship other gods. There is no Jezebel tempting us into going the wrong way. But is there?
What is it that we put before God? Isn’t anything we put above Jesus an idol? For me before, and in truth even after I became an apprentice to Jesus, it was money and career that was my false idol, my God. For others, it is golf, a social club, football, the masons or even their children that come before God.

Who do we allow to influence us? When Jesus says we should welcome the stranger and protect the widows, and orphans it seems obvious. But when those we mix with say that the ills of our country are because of foreigners and immigrants who do we listen to?
When Jesus says love your neighbour is up there with loving God, of course, we want to do that. But when society says to look after number one, where do we take our lead from?
Maybe Jesus warning to Thyatira is more relevant to us today two thousand years later than we would like to admit.

So if that is the problem, then what is the solution?

The solution is a squirrel!

Ah, I had better explain with a story.

So there was this Vicar, let’s call him Wayne. One Sunday Wayne was taking an all age worship service and he is asking the children a question. He starts, “I’m going to describe something, and I want you to raise your hand when you know what it is.” The children nod eagerly. “This thing lives in trees and eats nuts.” No hands went up. “And it is grey and has a long bushy tail.” The children were looking at each other nervously, but still, no hands raised. “It jumps from branch to branch and chatters and flips its tail when it’s excited.” Finally, one little Jack tentatively raises his hand. Then Wayne quickly calls on him. “Well, said Jack?” Jack says, “I know the answer must be Jesus… but it sure sounds like a squirrel to me!”
The answer is always going to be Jesus. Jesus is the solution and that’s OK.
Because if we keep the main thing the main thing. Keep Jesus at the centre of our lives then good and bad will come around and we will know He is with us in both. When the world tells us lies and false news then we will know He, Jesus is the way, the truth and the life. And when we like the church in Thyatira are tempted by our Jezebels, we will now what our Lord and saviour would have us do.

So the answer really is simple, the answer is to get to know Jesus better.

How then, does that warning to the church all those years ago, and that solution to us of getting to know Jesus better, impact tomorrow morning?

Well, there are two ways to get to know God better. By reading his word, the Bible, and by spending time with him in conversation, in prayer.

Now I am not going to tell you what to do but you know how much time you spend with God chatting with him and reading his word right now. I would just say if you want to know him better, up the ante. If you pick up Bible once or twice a week. Try picking it up every day for 5 minutes over a cup of tea. If you speak to God in prayer only on a Sunday. Try chatting to him as you walk to the shops a few times a week. If you never pick your Bible up outside of the church, pick up some Bible notes and read them a few times during the week.

If you want to know Jesus better and follow Him, you will need to spend time with him.

Make a decision right now to do something about it. And if you do, Jesus says he also give you the morning star. Which is code for it will be the best decision you ever made.

Don’t forget this Sunday 29th December is an all-together service.

Come along as we celebrate together 10am at St Nick’s.

Just so we are clear there are no 9.30am or 11am services.
8am Holy Communion at St Thomas’ as usual.